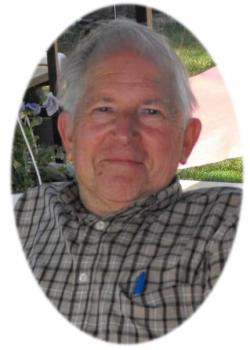 It is with heavy hearts that we say goodbye to a wonderful brother (in law), and uncle, Keith R. Estey, who passed away Sunday, February 7, 2021 at the DECH.
Keith was born on May 22, 1938 in Zealand, NB, the only son of the late Ronald and Ida Estey. Keith was often known as the Community Handyman. He fixed watches, clocks and many other nicnacs and loved visiting with the people when they came in with their broken items.
He was well known on the CB Radio as XM6512101 Mr. Fix It and he talked to people from all over. Keith tagged every email message with this says, “If your outflow exceeds your income, then your upkeep will be your downfall”.

That was the one thing about Keith, he never let his disability in his wheelchair stop him. He has literally been everywhere from province to province. His friends would plan the day trips and pick him up and off they would go. Keith was also a highly intelligent man. Some of his pastimes included playing Sudoku and Crossword Puzzles. He loved to read his Bible and he loved his flowers in the summer.

He has a very close family and a sister that meant the world to him. In earlier years, every other Sunday, Keith would come over for dinner and in the summer times, he loved sitting outside with Merle and talk up a storm. Merle was the brother he never had. Beryl took care of Keith after their parents passing and she had her weekly visits, when she could, at the hospital and then at the York Care Centre where he made his new residence as a Frederictonian. We often joked with him about this.

In addition to his parents, he was predeceased by three infant siblings, a nephew Audwin Brewer, niece Daphne Brewer and several aunts, uncles, great nieces and nephews.

Visitation took place at the Stone Ridge Pentecostal Church, 129 Upper Stoneridge Road, Zealand, NB the evening before the private funeral service that was held on February 11, 2021 with Rev. Dale Brewer officiating, assisted by Rev. Terrance Brewer. Music was provided by Lisa Coughlan and Alvin and Audrey Brewer. Poems were read by Alvin Brewer, No Wheelchairs in Heaven and How Far is Heaven by Ginette Brewer. A eulogy was delivered by Marie Brewer. Interment will be at Zealand Community Cemetery at a later date.

For those who wish to make a donation in Keith’s memory, the family has suggested the Stone Ridge Pentecostal Church (Building Fund).
The family would like to thank all the nurses and volunteers in the Marysville Place Ward at the York Care Centre where Keith has resided for the last 1½ years, for all their help and kindness. And to Dr. Goodyear and the nurses on 4SW at the DECH for your gracious support. And a very heartfelt Thank You is extended to Bobby Brawn from the York Care Centre who became a dear friend over the past few years. Bobby, he spoke very highly of you and we are glad that he had you as a friend.
Arrangements by Flewelling Funeral Home, Nackawic, NB. www.flewellingswan.com